When I out grew a small home workshop I had to take our business of workbench building to a new setting. I’d nearly always worked in small wooden buildings so moving everything in to a stark breeze block and corrugated metal unit felt alien. The space was cavernous and everything about it was cold and industrial, but this was a new opportunity to make the most of the extra space. I’ve always loved traditional hand tool woodworking but was well aware that the business required me to take advantage of machines. I envisaged that as the business grew the expectation would inevitability be for things to continue in that direction – bigger machines and expanding in to larger workshops.
Creating the new hand tool workshop at the barns recently has been much more of a home from home. The brick walls and oak trusses are inviting and warm through the signs of age. They are to a large extent falling to pieces but somehow that only adds to the attraction for me. 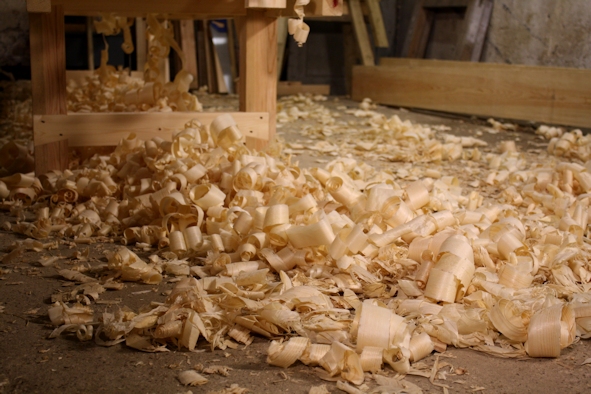 My ideas behind these two workshops have been very different, they are my two extremes. One is a space of power and production, the other a place to experience, take in and explore my craft. One workshop created as what I want and the other for what I need.
I noted recently though how despite the increase in production of our business over the past few years, it has not become the workshop that I once envisaged. The industrial setting has not moulded our business it to a manufacturing facility, I seem to have subconsciously done everything I can to prevent this. It seems instead that I have tried to mould the setting in to something more simple.
My small machines have not grown in size as planned but dwindled in numbers, and rather than jigging up and making templates for batch runs I have nothing more than a collection of story sticks jotted down on scraps.
Just like a workbench our workshops evolve over time and right now I feel that the two extremes I thought I had are in fact pulling closer together. Browsing a Felder brochure a few days ago I felt that I have stopped trying to move with the so called times. I am much more likely to dispose of the router next rather than invest in some fancy new kit. Perhaps it is stupidity to move against what I have always thought was right for my business but as things progress I’ve come to accept that I’m just not cut out to be anything more than a simple craftsman.
Given time to evolve I suppose a workshop is not so much what we feel that we need or want but like anything we create, it becomes an extension of who we are.

« What Would You Do?
Sharpening Stone Types & Preference »