Early last year I signed for a large mysterious parcel. It was clear from the labelling that it had come from far and distant lands, but there was no hint to what lurked within. Opening the box (like a savage) revealed a collection of books, each beautifully covered with canvas; not old but new.
This was a collection of published work by Lost Art Press, and attached was an envelope with the words ‘Richard & Helen’. There was no letter inside with lengthy explanation but a single postcard with the captivating image of a man seemingly about to end it all with the aid of his workbench…and a spade. I enjoy this image because it reveals itself to you slowly, it’s not until your second or third look that you realise it is in fact a desperate and very dangerous attempt to raise up the height of the workbench, probably to 38″. 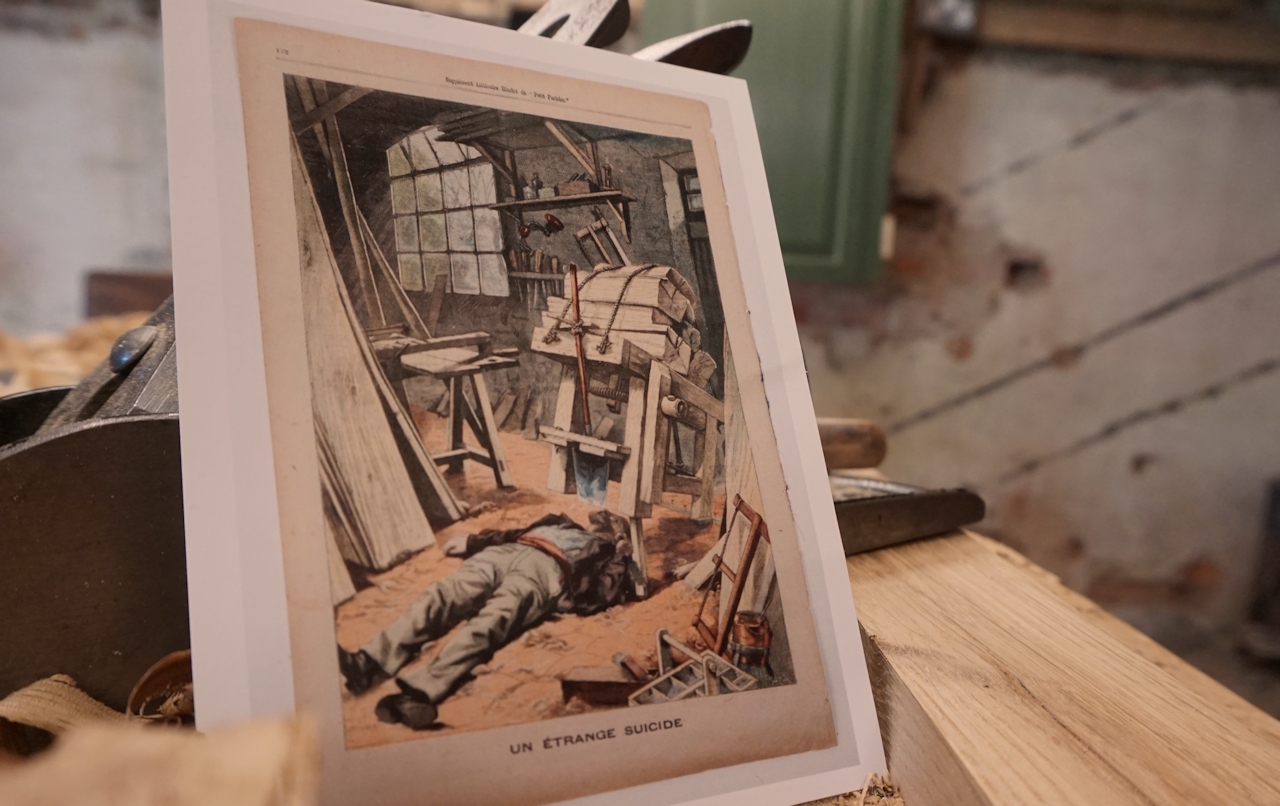 There was a sentence on the back of the card and that was all, but it was enough to get my head whirling round. Could we really pull this off, me writing a book?

Of course we had to say yes. There was a lot of umming and ahhing but both Helen and I knew that whatever sense we talked in to each other we wouldn’t pass on this job. A bit like the barns.

If you aren’t familiar, Lost Art Press are a small publishing company in America who focus on the highest quality books all on the subject of hand tool woodworking. We had met Chris and John, the founders, at the European Woodworking show some months prior and had spoken at great lengths with Chris at the taven. We spoke a lot about woodworking, workbenches and moustaches, when I think back Chris had mentioned a book idea which he was forming. Some point later something must have clicked and he had the stupid idea of asking us if we’d do this book.

It didn’t take much talking to realise that Chris is a very strange man. That’s a good thing. It’s the kind of strange that comes after passion and one that I relate to well. I don’t know where to begin with normal folk… Helen’s strange…
So far writing this book I’ve noticed that it’s important to be that kind of strange. You have to go to bed with a quill on your side table, it’s a project that you have to give yourself to 100%. You probably won’t come back 100% but that’s the point.

At a similar time to receiving this offer I had started having difficulties with my health. Once we understood the cause and failed to get anywhere dealing with a crackpot and a coward we had a huge upheaval and moved workshop and then our home. This set us back in a big way but as far as the book’s concerned this has been hugely benificial.
Cataloging all the ideas that the book will cover requires a lot of pre-thought and the added time has allowed our ideas to form and mature.

Many who have met us or spent any time on this blog will know that we’re the type of people who would write a book, self publish, sell a couple, loose lots of money and then write another one anyway. We attempt most things on our own and If I hadn’t met Chris and his strangeness then we would probably have declined, I don’t think you should go in to a big project with company that you don’t feel get you.

Now that we’ve laid out the structure and got our ideas together clearly on to paper we’re working on finding the funding and time for the incredible amount of projects which we’ve got lined up.

This book so far, despite the fact that it is a long way off has changed both our lifes. its a kick square in the balls as a wake up to why we chose this path, to learn, to create and to avoid the rutt of life.

For that Lost Art Press, we are truly grateful.