When you wake up in the fire wood pile with a nose bleed you know that something is going to have to give. I’d been having migraines for a little while which was odd as headaches are not something I’ve ever suffered with, and I’m rubbish at putting up with it. I’m not one to moan about feeling ill though and I’m very well looked after (Helen feeds me like a king!), my job keeps me active and when I think about it I can’t actually remember when I was last unwell, or Helen either. 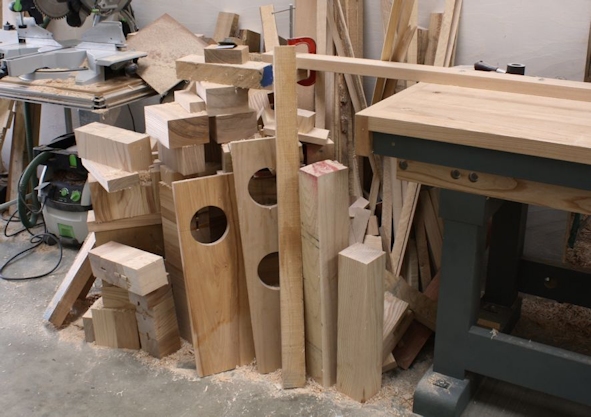 It’s typical then, that our neighbour at the workshop has been gassing me out. It’s odd how things can creep up on you and catch you unaware. We’d started to keep a diary of the migraines to put some sense to them, but then within the space of a week I started to completely fall apart – rashes, nausea, dizziness.
It came to a head suddenly and on realising what the cause was, Helen banned me from work.

Our workshop neighbour is a fibre glasser. We’ve noticed his fumes in the past when passing by his door but felt sufficiently away to not be in danger when working. Maybe he’s changed the way he works, or perhaps my body has just had enough of a faint but daily dosing of chemicals? Either way, after Helen’s extensive digging we were certain of the cause and that these chemicals were not to be messed around with – there’s some horror stories when you get looking.

I’ve stayed away from the workshop for over a week now and feel perfectly well, to be honest I haven’t felt this well in a long time. Though I’m free from chemicals, I’m acutely aware of time creeping up on us. We’ve kept busy, since there’s so much to be done at the barns, but keeping to deadlines on workbenches for our customers is far more important.
Much digging, thinking and brainstorming later, it seems that there are many loop holes when in comes to health safety in the workplace. I probably couldn’t employ someone with that air pollution, but there seems to be nothing to protect me when it comes in from a neighbour. Though I’m sure we could get something sorted out, chances are it would take months at best, and it’s got to the point when as soon as I get a whiff of that place I’m as good as out cold. I popped the other night to pick a bag of fire wood up, and let’s start back at the beginning of the post. After a lot of thought we decided that we needed to make a positive move out of this situation rather than spending energy declaring war on the estate.

We’ve found in life, that if we allow things to get comfy for too long then something disruptive is probably about to happen. We’ve had half a year of feeling very settled with our business, and now it seems like life is telling us it’s time to move forward. This situation is causing us some massive stress and the only way we can face it without falling in a heap, is to let it push us in a positive direction.
We have a huge amount of work on at the moment which is certainly the biggest concern – along with being busier than ever with the workbenches and many vice orders, we also have ‘Project X’ in the pipe line – all I can say on this one is that it is not a simple job. Then there’s the videos which we’re also busy creating at the minute.
We’d love to take somebody on as an apprentice but it hasn’t really felt like the right thing to do just yet, and the situation that we’re in at the moment really highlights why we’ve been wise to hold off on that.

We’ve come up with what should be a very nice solution to this unfortunate situation. There’s going to be some hard graft to get us there, but this is one of those realities of being self employed. It’s the realisation that we’re not indestructible and that something small can tip the whole balance, in fact people can cause you grief and it’s simply your own problem to solve. We’ve done this for long enough to know that there’s no time to feel down about it, and if we plan things right we have a chance to push ourselves in to a more beneficial outcome.

All I ask is that you don’t worry… we’re pros and everything is in hand. Plus, Helen’s just bought me a tractor! (it’s like a Shetland pony… or hamster). We’ll brief you on the plan as soon as it’s confirmed.