Due to disturbances there have been several things that we’ve worked on and mentioned that were left half done. Now that we’re settled in to our new workshop we’re both feeling reinvigorated and very much excited about picking things back up, finishing them off, and starting anew. Here’s an update on what’s being worked upon and what’s around the corner.

The Bench Video – This is Richard’s endlessly long 12′ English workbench. The build was started earlier this year and we took the time to film every stage so that it could be made in to our first premium video. At present we have many hours of footage waiting patiently on a hard drive, and I’m slowly but surely editing my way through.
This won’t be available until next year, however if you like workbenches and building by hand it will be well worth the wait.

The Website – I began working on a redesign of the blog last year to give it a facelift. I became distracted by the purchase of some barns and our ideas changed along the way. A fresh redesign is almost complete and we’ve aimed at keeping things pretty but straight forward, with some important improvements for viewing on small mobile screens, and some expansion room for adding extras down the line.

The Workbenches – Our bread and butter, the workbenches have had a big upheaval due to our move but are seemingly happy in their new home. The designs have been re-tweaked over the years until we felt that they were just right, but we’ve considered streamlining the range slightly since our move, and shall provide more details as soon as any decisions are made. 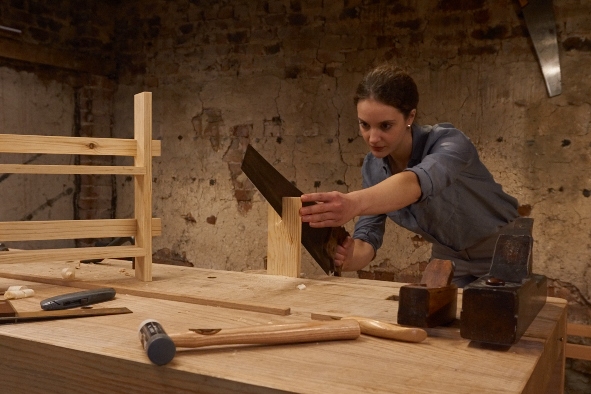 The Beginner – My journey of getting started in woodwork has been continuing and I’ve been loving it. I’ve restored a handful of tools so far, and with good guidance I’ve been able to get them working wonderfully. So good in fact, that when I can’t find them I know they’re on Richard’s bench or in his hand – so much for having my own personal set of tools.
I’ll resume shortly with some details of how I’m getting on.

The Book – Apparently we’re writing a book… or at least I hope the rumors are true because we’re pounding on with it. This one really is exciting!