Wooden planes can be quick and easy to restore compared with metal ones, as material can be removed quickly with sand paper and chisels, unlike the relatively slow material removal when working with metal. By the same nature though, wooden hand planes can often be extremely worn and warped, which can make things difficult for a beginner like me. The best solution is to go out and see the plane before you buy. Often old wooden planes can be found very cheap and in ready supply at junk shops and car boot / garage sales, if you’re in the right area.

Sole flatness can be restored relatively quickly, but key areas to check for are how well the iron seats on the bed of the plane, and how open the mouth has become through wear. For a smoothing plane, a worn mouth can be a problem, particularly if the plane has a single iron. If you’re not sure what this means, or why it’s a problem, then have a little read here about mouth widths on hand planes.
Avoid buying a wooden plane that has a wedge that feels like it doesn’t belong to it. Chances are it doesn’t, and you’ll struggle to get it working well. 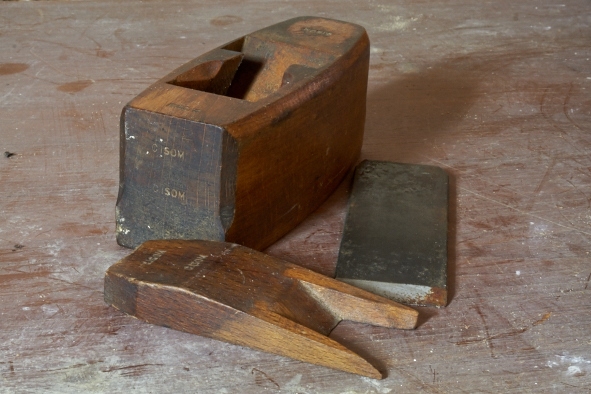 I was fortunate to have Richard on the look out when I was buying my old hand tools, and he picked me out this lovely little wooden smoothing plane, that was in great condition for it’s age. He felt the restoration should be simple, and so he left me to it.

My instructions were to take back any grime and residue built up around the plane, and then to flatten the back of the iron along with the plane’s sole.

I set to with some very fine wire wool giving everything a quick clean over.
I didn’t want to take back too much of the patina on the plane body, so I was gentle, and a swift wipe was enough to see the wood re-emerge – a lovely piece of quartered beech.

The mouth of the plane needed extra attention where dust had become caked up tightly in the corners. This was an important area, because if I’d left it, it would cause a problem later when seating the iron in nice and flat.

Truing the back of the iron was by far the most lengthy procedure in the restoration.
I had the option of a water stone grinder but felt that I would ruin the whole thing if I used something fast cutting – I really wasn’t confident about holding the iron flat, and for good reason.

I started out with 180 grit paper on the granite slab and my pile gradually increased right through to 2000 grit.

If you’re going to do something similar for the first time then I would point out that sticking the paper down to the flattening plate securely, would be a very good idea. I may have received similar advice but it went straight over my head, and I only held the paper down loosely with a bit of suction from wetting the underside. The paper curled up at the corner, but I carried on regardless, back and forth over and over.

When I stopped to check on progress it was apparent that something wasn’t quite right, perhaps it was the curling up paper or just poor technique, but I had managed to curve off one of the corners. This wasn’t the only issue. After revealing some nice fresh steel it had become clear that the pitting in some areas was deep – I called out for help. 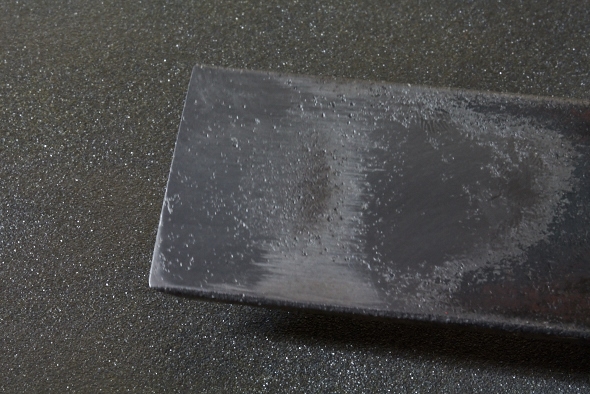 I was shown a better technique for holding the plane iron while pushing. This was to turn the iron to a diagonal position rather at 90 degrees, and focus on making nice long strokes (instead of many short ones) with a stronger down force on the push than on the pull.

I gave things another go and saw some improvement in the corner but the pitting looked like it might defeat me. Richard came to the rescue with the grinder to speed things along, he held the iron flat against the side of the stone and in just a couple of minutes the pitting was removed. It’s definitely a bonus to have access to the grinder for restoring old tools like this. 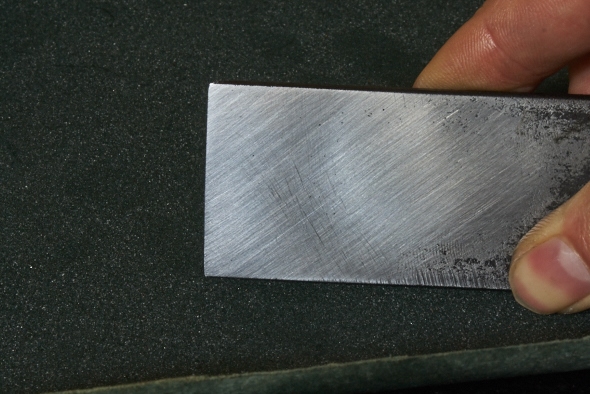 I was told that I didn’t need to flatten the whole thing, the first 2″ was enough, so it was now ready to go back to the flattening plate and work up the grits.
I was advised not to spend too much time on each grit – once I could see even scratches across the surface I was ready to move to the next. By the 400 grit I could feel a noticeable difference, it was smoother to push and the scratches became less visible, the surface looked dull and even. 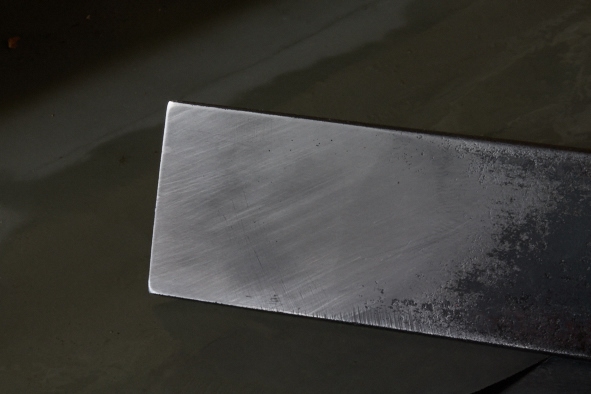 I was conscious the whole time of keeping the iron flat so that I didn’t ruin the edge again and create lots of extra work. Slowly though the round over returned, it wasn’t as bad as before but this time it was on both sides. I’m still clearly no expert, but hopefully it will be a lesson well learnt. After a slapped wrist for shoddy technique I was able to improve on things, and with a lot of concentration I was able to reach 2000 grit with the iron (almost) straight at the corners and lovely and polished.

I needed to turn my attention to the sole of the plane, which was a similar but much faster process. I started and finished with 120 grit sandpaper which I was told was ample since the sole of this little smoothing plane will become burnished through use. This small, wooden body took less than 3 minutes, I simply pulled it back carefully along the sandpaper until the darker, low spots were gone. 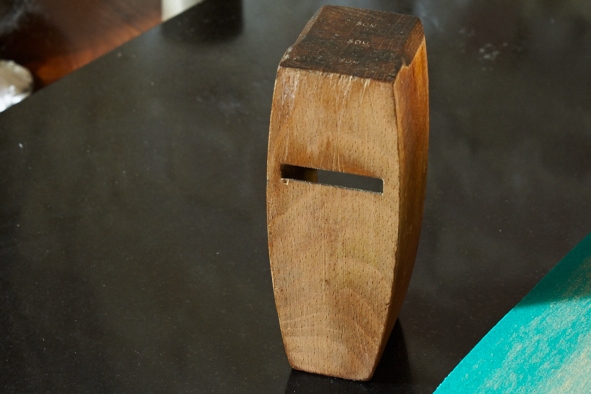 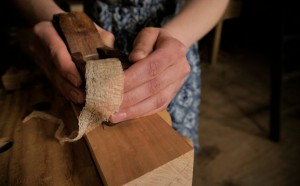 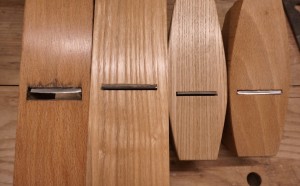 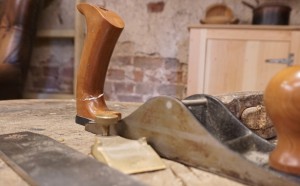 « Around The Corner
Left Handed Woodworking »