I have a great respect for Paul Sellers and especially for the amount of time that he puts it to encouraging hand tool usage. But I was pointed to a post on his blog today which I had mixed feelings on and I did find myself a little riled reading through.

There were two points which I took from it and the first I pretty much agreed with; a great demonstration with a well set and sharpened plane to show how it pulls itself in to the wood without the need to push down. I feel this is an important point to educate people on.

What puzzled me though was how the post used this to support an argument that there’s no need for a low bench height; I was confused as to how the two are connected.
Clearly Paul’s favourite height of 38″ suits his approach and methods perfectly but towards the begining of his video he calls low benches ‘ridiculous’ and this is the part that I feel needs further thought before everyone goes dismissing low benches completely. I’ve not heard of this ‘overhead planing’ which Paul refers to but I definatley feel that there’s a very important point which is being missed. 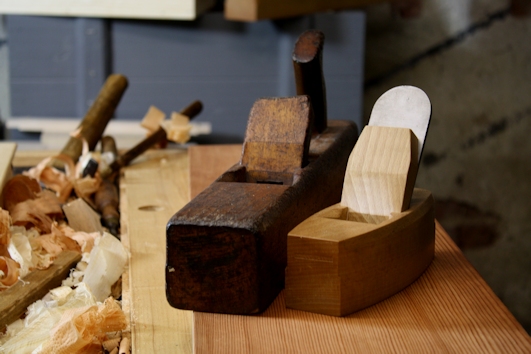 I can’t go fully in to planing techniques here but the main reason for having a low workbench is not for adding significant force downwards but to allow you to take the optimum stance for the heavier and more tiring work of say hand thicknessing.

Stance is the vital point here and the best way I can explain this is by asking you to imagine sliding a lightweight chair; since you won’t be expecting too much resistance you’re likely to stay fairly straight as you push. Think now about pushing something much heavier like a car, chances are you’ll stand your feet apart and bend your knees to ground yourself in preparation. The force doesn’t change direction between the two circumstances it’s just that there’s more of it to counter balance. If you don’t take this lower stance then your efforts to push the car would be far less productive and more tiring.

So bringing it back to planes – of course these should never feel anything like pushing a car but it’s the stance which I’m trying to emphasise here.
That finely set, well tuned No. 4 can be pulled successfully with a fairly straight stance. If you swapped it for heavily set jack plane to hog off more material then whilst it may still be possible to pull it along with the string, you would certainly struggle to get far without preparing to give it a much stronger pull and as a result you’re naturally going to lower your stance.
The heavier planing cuts of hand thicknessing will always require a little more downwards force as well but the main purpose of a lower bench height here is to keep your arms at the right height in relation to your body. If you’re having to raise them at all then you’ll loose a lot of strength and not only do you tire more quickly but it can also become painful on your back.

To say that a low bench isn’t ideal for fine work or joinery would be a very fair point to make but to simply say that low benches for woodworking are rediculous, well this makes a strong point without putting in any context or sharing a full understanding.

Whilst many people enjoy the speed of preparing their timber with machines before bringing in the hand tools there’s also a huge interest in stripping things right back and omitting the machines altogether. There are plenty of reasons to do this; space restrictions and noise for a start but the point is when someone is using a low bench it’s probably for good reason – if you think thicknessing boards all day with a hand plane would be tiring, consider doing it whilst depriving yourself of half your strength.

I’m hoping to clarify rather than confuse with this post and so I feel I should add something which I’ve said in the past. Bench height is not an exacting sceince and so you shouldn’t feel the need to become too consumed by it as an inch or two either way isn’t going to alter your experience. There are general things to bare in mind such as the lower bench being more suitable for heavy thicknessing and the taller for detailed joinery but then I know many craftsmen who sit and work off a stool! If you are looking for some basic guidlines then this old post may help but to be honest the best bench height is the height which works best for you – I’m sorry that isn’t definitive but woodworking is not a definitive subject. 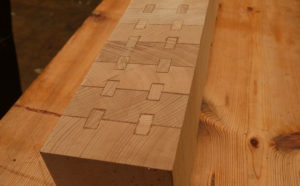 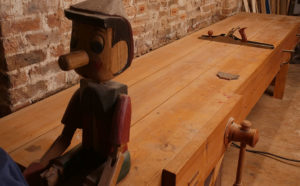 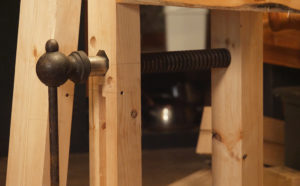