We had a great time at the recent European Woodworking show and have a few snippets to share with you over the coming weeks. My favourite moment was trying out an antique moulding plane brought along by Richard Arnold. This was my first encounter with Richard and what a fantastic chap he is! He’s genuinely passionate about what he does, collecting and researching old planes, if you have a query about a makers mark than he’s the man to know!

At 5 ½” wide this particular plane was fascinating just to look at but Richard had been curious about whether it would still perform so what else could we do but give it a go? To cut a full cornice moulding with one plane takes some doing so there’s a rope attached which the apprentice would use to pull (in this case me) to aid the craftsman (Richard A) pushing the plane through the cut. Richard (Arnold) roughly cut away some of the waste material with smaller planes first and we finished up the cut with the beast. The plane did a cracking job resulting in a very crisp finish on the moulding (and a cracking job of pulling our backs out!).

Working with planes like this would no doubt have required a tank of a workbench. I’m imaging specialist benches built for this purpose, 12’ or more in length to allow full runs of cornice. That’s our 6’ Artisan workbench and Maguire Wagon Vice being tested in the video. I was half expecting this little bench to move at least a smidge under this use but I was pleasantly surprised to see it didn’t even shift a mil!

Richard Arnold has a website here which is definitely worth a look Old Wood Planes He puts a lot of his time in to researching these old planes so if you can offer any other unusual finds I’m certain he’d be very interested. The woodworking world needs more chaps like him! 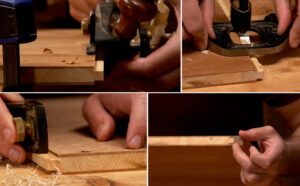 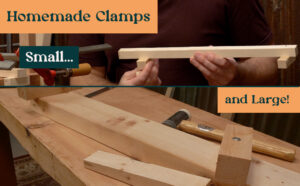 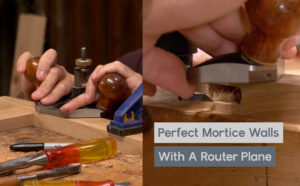 « Does it Hold?
Workbench Designs »